Prestigious Harvey Prize, a predictor of the Nobel, goes to Raphael Mechoulam One of the most prestigious scientific awards, Technion’s Harvey prize in Chemical Engineering and Medical Sciences, went to Professor Raphael Mechoulam – the “Godfather” of modern cannabis medicine.

Professor Raphael Mechoulam from the School of Pharmacology in the Faculty of Medicine at the Hebrew University of Jerusalem, is one of two winners of the esteemed Harvey Prize for his ground-breaking research in the world of medicin­­al cannabis. His studies in this field have given the entire world a new perspective on cannabis as a healing plant, rather than just a recreational drug.

Harvey Prize – A Predictor of the Nobel Prize!

Over the years, the Harvey Prize has become a reliable predictor of the famous Noble Prize. Since 1986, more than 30% of Harvey laureates were ultimately awarded the Nobel Prize. In-fact three of them – Professor Jennifer Doudna, Professor Emmanuelle Charpentier and Professor Reinhard Genzel – are to receive this years Noble Prize!

Based on his huge contibution to medical cannabis studies and we can only cross our fingers and hope that it will be the “Godfather” of cannabis research that will get next years Noble, or the one following it.

Prof. Mechoulam was born in Bulgaria (1930), where he studied chemical engineering. After immigrating to Israel he received his M.Sc. in biochemistry from the Hebrew University of Jerusalem and his Ph.D. at the Weizmann Institute and completed his postdoctoral studies at the Rockefeller Institute in New York. In 1960 he joined the junior staff of the Weizmann Institute, and in 1985 he became a professor at the Hebrew University.

It was his curiosity about cannabis as a healing plant that led him to a police station in 1963, where he obtained his first sample – 5 kilos of hashish – to use for research purposes. Mechoulam then developed a relationship with employees at the Israeli Ministry of Health, who gave him permits to continue getting cannabis products for his studies over the next few decades. As he casually summarized it, “I always went to the ministry of health, they gave me a letter to the police, went to the police and drank some coffee with them, took the hashish I needed and that was it.”

He is the first scientist to isolate plant cannabinoids, first THC (tetrahydrocannabinol) then CBD (cannabidiol), and he also is the first to discover the human endocannabinoid system, which is a complex cell-signalling system made up of receptors found throughout our entire bodies. These receptors react to plant cannabinoids to treat numerous conditions we suffer from. All living creatures except insects have an endocannabinoid system. 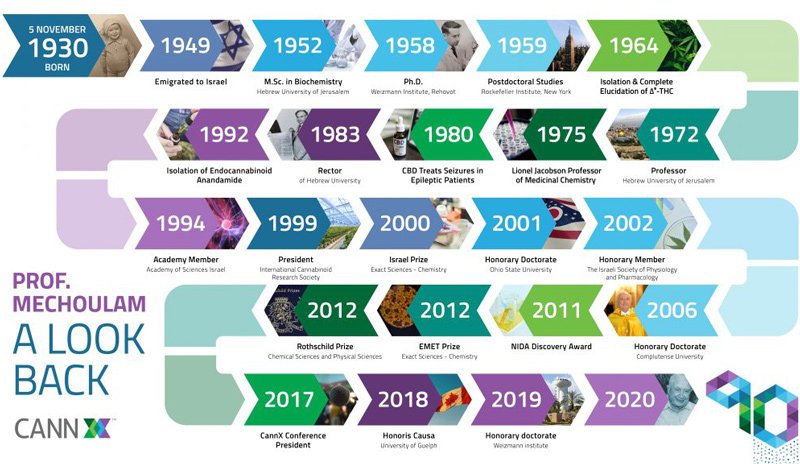 His research led to the development of many safe and natural treatment options for more disorders and diseases than we can count, but particularly epilepsy, mental health, MS, and pain management. Both of the leading cannabinoids – THC and CBD, are used today in brand name medicines – Marinol, a medication used to treat nausea which uses a synthetic THC compound; and Epidiolex, the first FDA-approved medication to use natural CBD as the main ingredient, for treating rare forms of epilepsy.

For his many achievements in the field of cannabis research, Prof. Mechoulam has been bestowed with much recognition and a myriad of prestigious honors, including the Israel Prize in Exact Sciences – Chemistry (2000) and the Kolthoff Prize in Chemistry from the Technion. He is a member of the Israel Academy of Sciences and Humanities. In 2014, Prof. Mechoulam was named one of the “World’s 50 Most Influential Jews” by the Jerusalem Post.

Interview with Raphael Mechoulam, The Father of Cannabis Research, on “Innovation in Clinical Research & Clinical Trials”

As previously mentioned, Mechoulam was only 1 out of 2 winners of Technion’s Harvey prize. The other winner was Professor Joe DeSimone, known in making significant contributions in materials science, chemistry, polymer science, nanomedicine and 3D printing.

DeSimone has also made important breakthroughs in the use of supercritical carbon dioxide to produce fluoropolymers, which has many medical applications. DeSimone has published more than 350 articles in scientific journals, and has over 200 patents to his name. Additionally, DeSimone is credited with creating important innovations in the field of precision medicine, such as the particle replication in non-wetting templates and in medical technology, including the continuous liquid interface production.