WEBINAR – Coronavirus: How easy will it be to develop drugs and vaccines? On March 31, 2020, for the first in Hebrew University’s third series of webinars about the coronavirus pandemic, Prof. Amos Panet addressed the question of what will it take to develop anti-viral drugs and vaccines against COVID-19. Before focusing on the present, he said the first known pandemic occurred 2,000 years ago, followed by many major ones since then – some caused by bacteria, others by a virus. For example, the Black Death, also known as the Great Bubonic Plague, was triggered by bacteria, while the smallpox pandemic was the result of a virus. He also cited the Spanish Flu and AIDS as other examples.

A professor of virology at HU since 1982, Prof. Panet said viruses don’t recognize borders. The pandemics he cited came from animal microorganisms that infected humans in a complicated process that doesn’t happen often. When it does, the disease spreads largely by way of people traveling. Modern travel increases the speed and extends the breadth of their spread as does the population density in many major cities.

With COVID-19, Prof. Panet said the world is now in the diagnostic stage which will be followed eventually by therapies. As part of the process, the main diagnosis is by the RNA of the virus and its genetic code. It’s similar to DNA in humans, but a virus has RNA. To detect whether someone has the virus, medical personnel take a swab from the patient, then amplify the RNA, using a PCR machine to do this. The other method to identify the infection is by the body’s response to the infection of the virus. Taking a blood sample and checking the antibodies produced by our immune system in the bloodstream is extremely helpful. Antibodies from one recovered person can be used after being isolated to help cure another person who sick from the virus.

Prof. Panet, who has cofounded two biotech companies based on his inventions, explained there are several drugs against viruses but not as many as there are antibiotics against bacteria. He described how a virus infects a person’s cells and then starts quickly replicating its RNA to infect more cells. Anti-viral drugs can block the replication of a virus, such as with HIV, and there are other drugs that block the exit of the virus from the cell.

After giving an overview of other viral menaces in the past and how the medical world responded, sometimes with success, other times not, Prof. Panet voiced optimism that a vaccine for the coronavirus will be found within a year. He referred to extensive research, clinical trials and other testing now being done in many countries in pursuit for such a cure.

The recording of the webinar follows, and you can view a gallery of the slides from the presentation below. 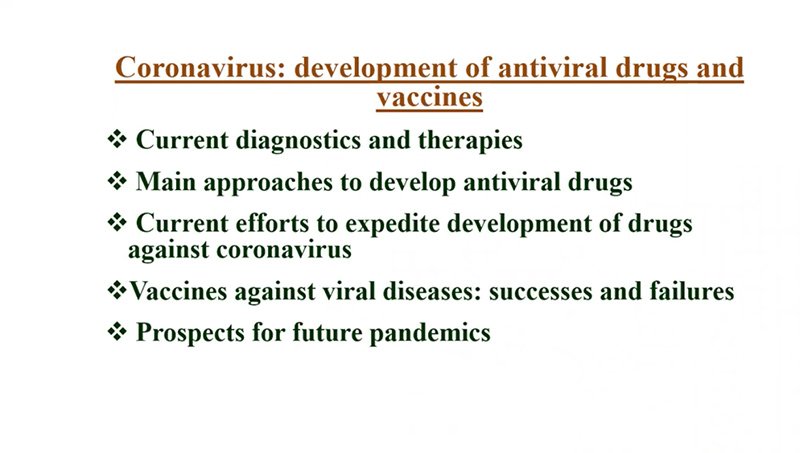