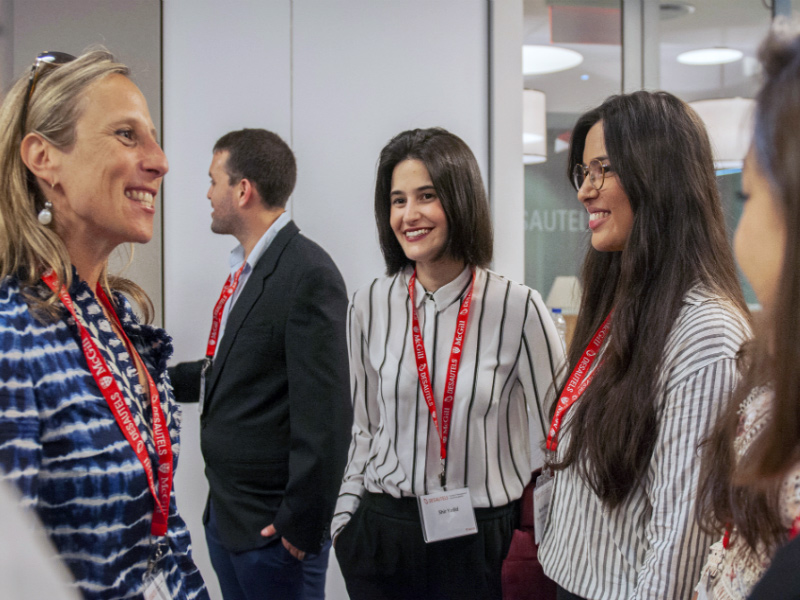 Close to 40 McGill University students are in Israel this month, some of them trying to get a handle on the country’s complex political system and others gaining an appreciation for why it’s been dubbed the “Startup Nation.”

These political science and commerce undergraduates are participating in new exchange programs that were made possible by the Gerald Schwartz and Heather Reisman Foundation, which subsidized most of the costs.

The political science program is being run in conjunction with the Hebrew University of Jerusalem and the business one is between McGill’s Desautels faculty of management and the Adelson School of Entrepreneurship at Interdisciplinary Center Herzliya. Faculty members from each are acting as lecturers.

Both programs, which offer course credit, began at McGill on Aug. 8, with about a dozen students from the two Israeli schools coming to Montreal to study alongside their hosts. The curricula are separate, but the two groups share in off-site activities, such a trip to Ottawa.

A week later, all of the students flew to Israel, where the political science students remain until Aug. 27 and the commerce students stay two days longer. In both cases, they attend classes and go on excursions with their Israeli counterparts.

The students are expected to complete joint projects extending beyond the formal itinerary.

McGill student Huaide Huang is thrilled to be participating in the business program, which focuses on financial services technology, or fintech. The Chinese native, who is taking a double major in finance and business analytics, said that, “I always wanted to go to Israel because I heard it is one of the most innovative countries in the world. I lived in the Middle East with my parents – two years in Dubai and two in Saudi Arabia – so that makes this even more of a learning experience.”

The exchange programs follow an engineering student exchange that took place last semester. For three months, students at McGill and Ben-Gurion University of the Negev (BGU) attended weekly classes together over the Internet. The program culminated with the BGU students visiting McGill in April, followed by the latter going to the Negev. They attended presentations by BGN, the university’s technology transfer company, and toured the country.

Neither the engineering nor commerce exchange generated controversy on campus, but pro-Palestinians demanded the cancellation of POLI 339: topics in comparative politics. The program also precipitated procedural wrangling among student leaders.

In January, the student group Solidarity for Palestinian Human Rights (SPHR) tried to persuade the Arts Undergraduate Society (AUS) not to approve the $1,000 fee students were required to pay (Quebec law stipulates that the student union must approve new extraneous fees).

SPHR argued, among other objections, that the course would be effectively inaccessible to students of Palestinian, Arab or Muslim descent because of the “discrimination” they would face in Israel.

Another student group, Israel on Campus, countered that the program would provide students with a better understanding of the conflict.

The AUS legislative council withheld approval by one vote, prompting an outcry from pro-Israel students. A couple weeks later, in February, the AUS executive committee overturned that decision, citing a lack of “necessary information” when the council met, which touched off charges of undemocratic behaviour.

Then, the AUS secretary general and deputy secretary general suspended the executive’s decision on the grounds that it was unconstitutional. However, final ratification rested with the Students’ Society of McGill University, and its board of directors approved the course fee.

In April, opponents of POLI 339 staged a demonstration blocking the James Administration Building. A petition addressed to university administrators was launched and remains online showing hundreds of signatories.

Harold Waller, the retired McGill professor who is teaching the course with colleague Richard Schultz, declined to comment on the program. Schultz did not respond to a recent email inquiry from The CJN. One of the two Hebrew University professors, Reuven Hazan, expressed confidence that both the Canadian and Israeli students will gain much from the program, which has become especially relevant with elections this fall in both countries.

The Hebrew University students are all in comparative politics, he said, so learning about Canada’s system is interesting to them.

While both are parliamentary democracies, there are significant differences between the two countries, he noted. “Canada is a federation, it has a constitution, there are no coalitions,” he said. “This is not a vacation for them. They have a lot to learn. They have required reading before the course and have to write papers.”

At a welcome reception, Desautels dean Isabelle Bajeux-Besnainou said this type of experiential learning is highly beneficial to young people and that she hopes for more exchanges next year.

Israeli Consul General David Levy, who co-hosted the reception, added that he’s “happy to see the next generation of partners that will build bridges between our two countries.”