Titled The Effects of the Coronavirus on the Economies and Financial Markets, Prof. Galai’s webinar showed the devastating impact the coronavirus health threat has already had on the world’s financial markets and economies. He said the current crisis is different and more worrisome than previous economic meltdowns, such as in 2008 following the stock market crash or in 2001 after the 9/11 terrorist attacks on the United States.

Prof. Galai depicted the economic instability now as more volatile, in large part because even the experts don’t yet know how long the present pandemic will last and how severe the human carnage and financial damage will be. It’s this uncertainty, he emphasized, which is especially harmful. He cited the industries that will be the most devastated, predicting some – such as tourism – even collapsing due partially to the prospect non-recoverable income lost during the COVID-19 catastrophe. He didn’t rule out the possibility of a full-fledged recession.

A world-renowned authority on finance, financial engineering and risk management, Prof. Galai was the former Dean of HU’s Jerusalem School of Business Administration and has also been a lecturer at several universities in the US and France. In his webinar, he described one of the priorities for all national governments is to extend support to companies, especially small and medium sized businesses which could otherwise easily collapse. He said deficit and inflation can be dealt with later as they will be the result of the pandemic, not poor economic management.

Reflecting the gravity of the current situation, Prof. Galai referred to the Fear Index, now known as the VIX, which measures the volatility in the financial markets. Never before the current pandemic has the index posted such an extended period of extreme volatility. And it shows no sign of abating any time soon.

The recording of the webinar follows, and below is a gallery of the slides from the presentation. 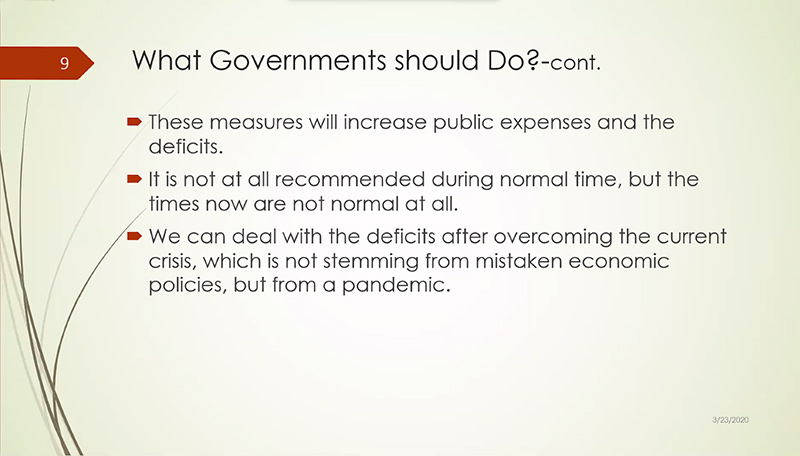